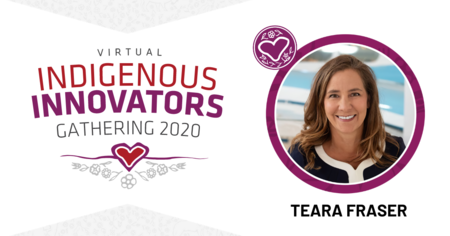 We are incredibly excited and honoured to announce our first speaker for the Indigenous Innovators Gathering 2020 - Teara Fraser!

The word “Iskwew” (pronounced IS-KWAY-YO) means “woman” in Cree and, for Iskwew Air, is meant to honour and celebrate “the first Indigenous woman owned airline, all women, and all those lifting women.”

As a proud Métis Iskwew and the founding visionary of the Raven Institute, Teara is a life-long learner. Negotiator, facilitator and coach, Teara holds multiple certifications in fields such as conflict resolution, coaching, leadership, personal development, and Indigenous and trauma-informed therapy. Teara holds a Master of Arts in Leadership from Royal Roads University and currently pursues doctoral studies in Human Development at Fielding University.

Teara is a brave-hearted Iskwew warrior, an edgewalker, a dreamer, a disrupter, a mother, a leader, an entrepreneur, and a proud Métis bridge-builder.